Without rain The London Brolly Bag company would not exist, that is a fact!

While chatting with a dear friend she gave me the idea to write about rain in this month’s blog.

So here we go.  I started doing my home work and this is what I came up with. I hope I won’t bore you with these facts.

I’ll start with the basics:

According to the Met Office the simplest definition of rain is drops of liquid water falling from the sky. This happens when clouds which are made of droplets become too heavy to stay suspended and thus fall to earth as rain.

Types of rain… there are four types.

Snow: it occurs when the temperature on both the ground and in the clouds is below zero Celsius.

Sleet: it occurs when the temperature in the clouds is warmer than that on the ground.

Hail: it occurs when rain encounters a layer of freezing air on its way to the ground and solidifies into ice pellets known as hailstones.

Wettest month on record in the UK.

According to the Met Office, February 2020 was the wettest month on record  with 202.1mm of rainfall. This was the result of three consecutive storms, namely Ciara, Dennis and Jorge bombarding the UK in quick succession.

Why are there April showers in April?

April Showers do exist.  It is a month of transition from cold winter days to warmer light days and the jet stream moves northwards.  In addition it is the time of year where there is a disparity with the land becoming warmer and the sea is still cold causing shower clouds to form. So even though it may not be a very wet month, April is associated with many showers.

Is collecting rainwater illegal in the UK?

I had never thought about this until  I started doing my research.

It is legal to harvest rainfall and encouraged by the water authorities. however there are standards and regulations that apply. In the US it’s an  entirely different story.  In some states homeowners do not own the rainfall that falls on their property.

Where is the wettest  place in England?

Apparently Seathwaite, a small hamlet in the Lake District, is the wettest populated area in England with annual rainfall reaching 3,552 mm.

Which is the wettest city in Great Britain?

How many songs have Rain in the title?

I was surprised to see that apparently 153 songs have Rain in their titles.

I’m not going to list them here, but my favourite is It’s Raining Men by the Weather Girls.

Anyway I hope you have enjoyed reading some rain trivia.

With this in mind, we would like to create a Coronavirus inspired checklist:

C – clean your phone! Remember that germs are everywhere, and your phone is often neglected. So be sure to give it a wipe down each day with an anti-bacterial wipe!

O – open a window! Fresh air is vital for good health, and if you have been keeping the cold weather out, fling open a window and get the stale air out!

R – remember to wash your hands often! It’s been in the news, so we won’t remind you how to do it!

O – organise yourself! Keep a “corona box” by the door with your hand sanitizer, tissues, wipes and other items that will help you feel confident as you leave for the day.

A – analyse the facts! Don’t get caught up in the panic, just know who is vulnerable and protect them and yourself!

V – vitamins! Remember that good health will keep you safe, and if you contract the virus, you can recover!

I – immunity! Zinc in particular is known for booting your immune system, so look into taking this as part of your vitamins. (we are not doctors, so you need to investigate if this is right for you)

R – rest at home if you are feeling unwell. You might not need to ‘self-quarantine’, but if you are working too hard, resting is good recovery for your immune system to stay in full operation.

U – understand what to do in the event that you do not feel well. Contact the NHS helpline (or your local helpline) and follow any instructions provided before going to the emergency room or doctor’s office.

S – smile! The sun is shining, and there is a theory that when the weather warms up, we could see a decline in this outbreak!

Many people find the rain to be annoying or inconvenient. They frown at the forecast, pout at precipitation, and damn the downfall. Yes, it can be a little cumbersome to have to prepare to walk outside in wet weather, but there is something quite cozy about a cloud forming above. Walking around under an umbrella, you are almost living in your own little world. Spy a blade of grass soaking up the water, splash a little harder in that puddle if you are wearing waterproof boots. There are little bits of happiness that can come from a rainy day if you know where to look.

This year, we are super happy about rain, umbrellas and our brolly bags, too! After a bit of decluttering, we are pleased to have a refresh of the website where you can browse our stock in four categories. Fun & Floral is our main stock, where you can browse some of our new and most popular designs. Fabulous is full of over the top designs that are perfect for the friend who has everything or the fashionista in your life. Dapper is our men’s range, launched last year, with longer designs to accommodate the umbrellas often carried by men. Finally, you’ll love combing through our Last Chance section as we clear out stock to make room for new bags in 2020. 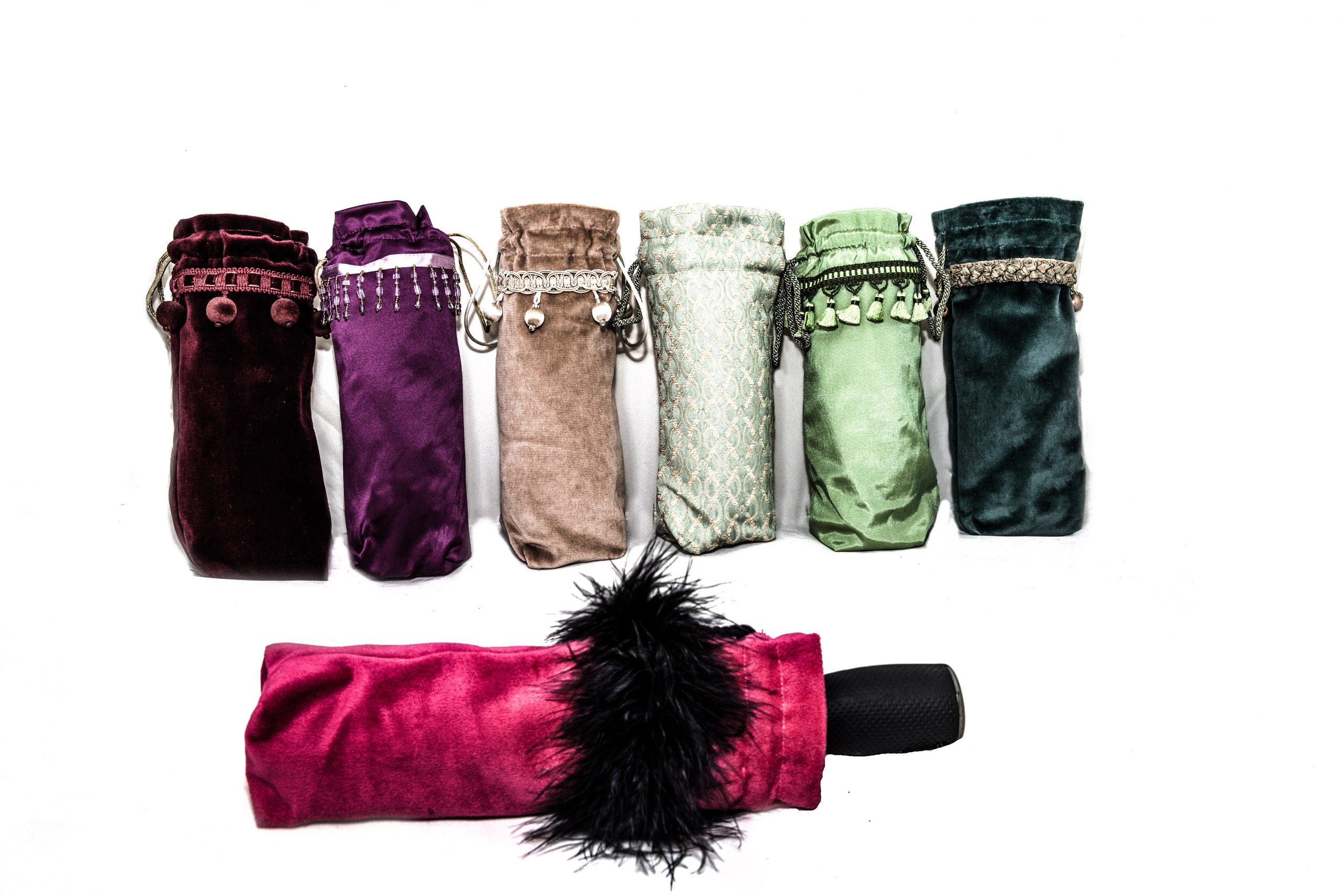 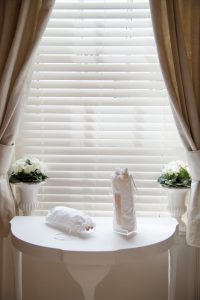 In a previous blog, we discussed the luck of rain on a wedding day. That doesn’t mean that a drenched dress and fascinator are the best look, either. In the UK we have over 200,000 weddings a year, with July being the most popular month to tie the knot, despite it being the wettest month of the year! Be prepared by ensuring you provide a good supply of umbrellas for your guests.

Our Wedding brolly bags are the perfect accessory for your full look. If you can’t find something  that you like, or have a special request, we would be delighted to make you a bespoke bag to match your outfit. Drop us a line with your requirements and let us know exactly what you need to complete that perfect look. Keep the rain at bay, and look fabulous in the process. 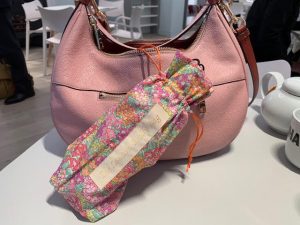 Historically, the London Season was a time when debutantes were presented to the Royal Court for their “coming out”. Protocol required a certain dress and accessories, including three white Ostrich feathers in your hair to denote that you were a single lady. No more do we require such frivolity, but in today’s modern London Season, a little rain must fall. That in mind, you should have a proper accessory for such occasions — the London Brolly Bag! Made with a double-locked plastic interior to catch excess rainwater, this is perfect for keeping your handbag dry. 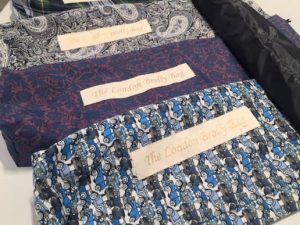 The term “Dad” is hard to track down when it comes to the origins. Even the Oxford English Dictionary says that the origin is unknown, and chalks it up to “baby talk”. That being said, Dad is one of the first words we say, and so your Dad should be on your mind as we approach Father’s Day. Unlike Mother’s Day, it is celebrated on the same day in most of Europe and America, but has been celebrated since the Middle Ages! So you have a few weeks to get the big guy a gift, and why not treat him to something unusual, useful, and unique. Get yours ordered by the 9th June to avoid disappointment! 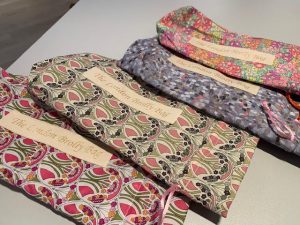 We are excited to launch our new collection for Summer 2019. Taking inspiration from the incredible weather that we have seen here in London so far this year, with bright sunshine and just enough rain to bring the flowers out early. Our new range features flowers with an Art Deco design, still quite a popular trend as we approach the centenary of the 1920’s. We have gone with purple painter’s pallet design that incorporates our love of art, having just returned from a trip to the United States where we enjoyed beautiful artwork at the many museums of New York and Chicago. Finally, our cheerful London In Bloom bag is so bright, it will never get lost in your handbag! 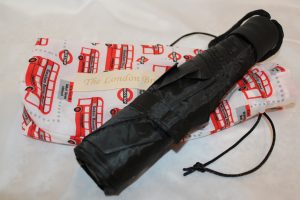 As we live in a world of selfies and photos, you might like to know that May is Photo Month. It was Aristotle who began with an idea that led to the invention of the “pinhole camera”. If he were alive today, we might spot him grabbing a quick selfie as he dashed to a discussion on global warming or political discord. Of course, he’d be sporting one of our stylish brolly bags for men, as Greece gets the odd rain shower this time of year. 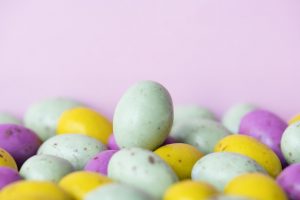 Easter (21st April) is late this year and runs close to St. George’s Day (23rd April). This means you have an opportunity to enjoy Easter eggs and Hot Cross Buns together! For those of you not in the UK, hot cross buns are enjoyed on Good Friday and St. George’s flag (the flag of England) is a white banner with a red cross. So we think combining the two is an appropriate snack with a good strong cup of tea.

April showers bring May flowers, and here at The London Brolly Bag company, we are always keen for rain to fall so that we (and you) can rock your stunning and stylish brolly bags! And if flowers are what you want, our bestseller collection has plenty of floral designs. You might be able to pick one up in our limited edition section, but be quick…! 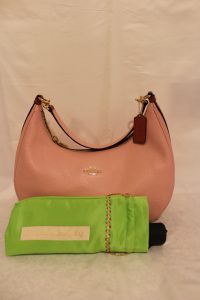 Happy April Fool’s Day! Some feel that a rainy day can be a terrible omen. Not true!! Rain on a wedding day is lucky in many cultures. As April Showers begin to fall, perhaps you need to look out for signs of good luck. We have discovered a few for you.
The Chinese deem seeing bats as a lucky sign for abundant wealth, and seeing five is even more prosperous. The Irish use a four leaf clover, while the English see a horseshoe as lucky. In the United States of America, some farmers will display a star on their barn for luck. If Germans spot a ladybug, this is a good omen.
The number 8 is a lucky number in China, and most umbrellas have 8 points! The design of an umbrella has often been attempted to be improved upon, but many have failed. In fact, it is said that the US Patent Office has 120,000 entries with the word umbrella, including dog umbrellas!
But we don’t think the design needs improving. We just think you need to keep your brolly in a bag, so that the rain is trapped, and you and your belongings stay dry!
Category: Uncategorized